Download e-book Trial of C. B. Reynolds For Blasphemy Defence by Robert G. Ingersoll, at Morristown, N. J., May 1887

Ought an honest man to be sent to the penitentiary for simply telling the truth? Suppose we had a statute that whoever scoffed at science -- whoever by profane language should bring the rule of three into contempt, or whoever should attack the proposition that two parallel lines will never include a space, should be sent to the penitentiary -- what would you think of it? It would be just as wise and just as idiotic as this. That is true. The Bible says of God -- "my anger burns to the lowest hell. Every word of it is in the Bible. He simply does not believe it -- and for that reason is a " blasphemer.

I say to you now, gentlemen, -- and I shall argue to the Court, -- that there is not in what I have read a solitary blasphemous word -- not a word that has not been said in hundreds of pulpits in the Christian world. Theodore Parker, a Unitarian, speaking of this Bible-God -- said: "Vishnu with a necklace of skulls, Vishnu with bracelets of living, hissing serpents, is a figure of Love and Mercy compared to the God of the Old Testament. Is not that true? If God be infinitely good and wise and powerful, is it possible, he is afraid of anything? If the defendant had said that God was afraid of his enemies, that might have been blasphemy -- but this man says the Bible says that, and you are asked to say that it is blasphemy.

Now, up to this point there is no blasphemy, even if you were to enforce this infamous statute -- this savage law. Now, is it not a fact that the Old Testament does uphold polygamy? Abraham would have gotten into trouble in New Jersey -- no doubt of that. Sarah could have obtained a divorce in this State, -- no doubt of that. What is the use of telling a falsehood about it? Let us tell the truth about the patriarchs. Everybody knows that the same is true of Moses.

We have all heard of Solomon -- a gentleman with five or six hundred wives, and three or four hundred other ladies with whom he was acquainted. 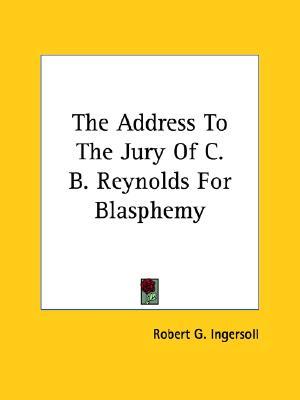 This is simply what the defendant says. Is there any blasphemy about that? It is only the truth. If Solomon were living in the United States to-day, we would put him in the penitentiary.


You know that under the Edmunds Mormon law he would be locked up. If you should present a petition signed by his eleven hundred wives, you could not get him out.

So it was with David. There are some splendid things about David, of course. I admit that, and pay my tribute of respect to his courage -- but he happened to have ten or twelve wives too many, so he shut them up, put them in a kind of penitentiary and kept them there till they died. That would not be considered good conduct even in Morristown. You know that. Is it any harm to speak of it? There are plenty of ministers here to set it right -- thousands of them all over the country, every one with his chance to talk all day Sunday and nobody to say a word back.

The pew cannot reply to the pulpit, you know; it has just to sit there and take it. If there is any harm in this, if it is not true, they ought to answer it. But it is here, and the only answer is an indictment.

I say that Lot was a bad man. So I say of Abraham, and of Jacob.

Did you ever know of a more despicable fraud practiced by one brother on another than Jacob practiced on Esau? My sympathies have always been with Esau. He seemed to be a manly man. Is it blasphemy to say that you do not like a hypocrite, a murderer, or a thief, because his name is in the Bible?

How do you know what such men are mentioned for? Maybe they are mentioned as examples, and you certainly ought not to be led away and induced to imagine that a man with seven hundred wives is a pattern of domestic propriety, one to be followed by yourself and your sons. I might go on and mention the names of hundreds of others who committed every conceivable crime, in the name of religion -- who declared war, and on the field of battle killed men, women and babes, even children yet unborn, in the name of the most merciful God.

The Bible is filled with the names and crimes of these sacred savages, these inspired beasts. Any man who says that a God of love commanded the commission of these crimes is, to say the least of it, mistaken. If there be a God, then it is blasphemous to charge him with the commission of crime. Gentlemen, there are many things I have read that I should not have expressed in exactly the same language used by the defendant, and many things that I am going to read I might not have said at all, but the defendant had the right to say every word with which he is charged in this indictment.

And why? Because no attack can be answered by force, no argument can be refuted by a blow, or by imprisonment, or by fine. You may imprison the man, but the argument is free; you may fell the man to the earth, but the statement stands. The defendant in this case has attacked certain beliefs, thought by the Christian world to be sacred. Yet, after all, nothing is sacred but the truth, and by truth I mean what a man sincerely and honestly believes. The defendant says:. The defendant probably asked this question, supposing that it must be answered by all sensible people in the negative.

If the Christian religion is true, then a Jewish girl was the mother of Almighty God.

Personally, if the doctrine is true, I have no fault to find with the statement that a Jewish maiden was the mother of God. If a God came from the throne of the universe, came to this world and became the child of a pure and loving woman, it would not lessen, in my eyes, the dignity or the greatness of that God.

LargePDF is an online source of free books download

There is no more perfect picture on the earth, or within the imagination of man, than a mother holding in her thrilled and happy arms a child, the fruit of love. No matter how the statement is made, the fact remains the same. A Jewish girl became the mother of God. If the Bible is true, and to repeat it, even according to your law, is not blasphemous, and to doubt, or deny it, is not contrary to your constitution.

To this defendant it seemed improbable that God was ever born of woman, was ever held in the lap of a mother; and because he cannot believe this, he is charged with blasphemy.

Could you pour contempt on Shakespeare by saying that his mother was a woman, -- by saying that he was once a poor, crying, little, helpless child? Of course he was; and he afterwards became the greatest human being that ever touched earth, -- the only man whose intellectual wings have reached from sky to sky; and he was once a crying babe.

What of it? Does that cast any scorn or contempt upon him? Does this take away any of the music from "Midsummer Night's Dream"? On the contrary, these great productions of the brain show the growth of the dimpled babe, give every mother a splendid dream and hope for her child, and cover every cradle with a sublime possibility.

If he was absolutely a child, he was like other children, -- like yours, like mine. I have seen the time, when absent from home, that I would have given more to have heard my children cry, than to have heard the finest orchestra that ever made the air burst into flower. What if God did cry? It simply shows that his humanity was real and not assumed, that it was a tragedy, real, and not a poor pretence. And the defendant also says that if the orthodox religion be true, that the "God of the Universe kicked, and flung about his little arms, and made aimless dashes into space with his little fists.

Is there anything in this that is blasphemous? Christ appears to be a truly natural, chubby, happy babe. Such a picture takes nothing from the majesty, the beauty, or the glory of the incarnation.

I think it is the best thing about the Catholic Church that it lifts up for adoration and admiration, a mother, -- that it pays what it calls "Divine honors " to a woman. There is certainly goodness in that, and where a church has so few practices that are good, I am willing to point this one out.

It is the one redeeming feature about Catholicism, that it teaches the worship of a woman.